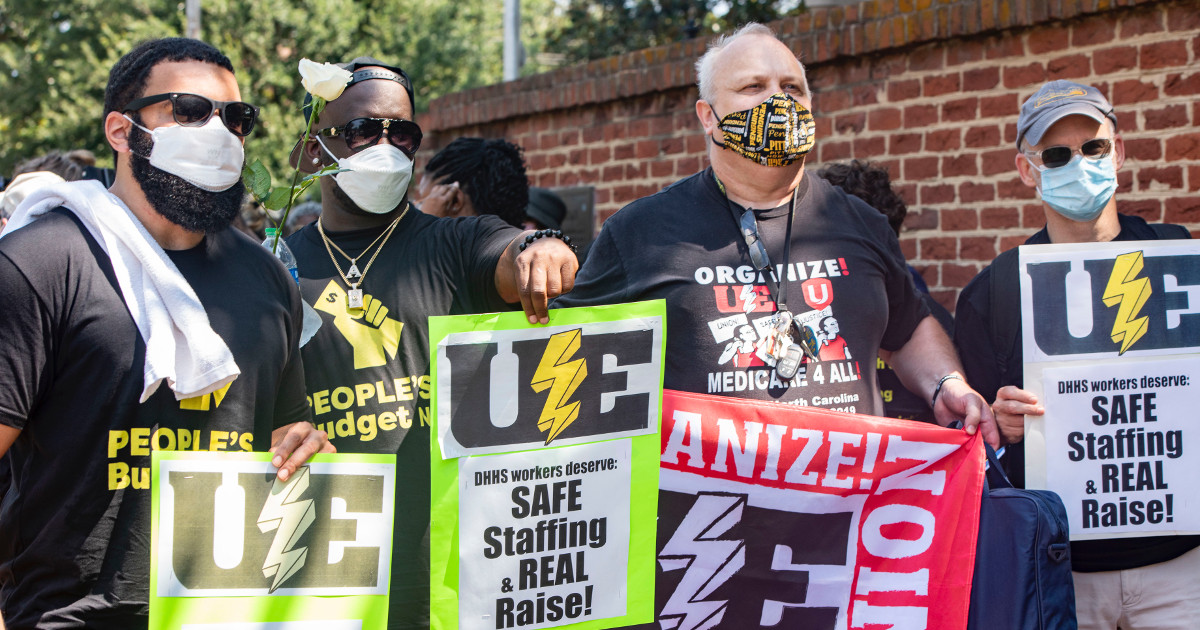 State workers who were on the front lines through the pandemic are frustrated at the current budget proposals coming from both chambers of the North Carolina General Assembly. On August 12, over 100 people, including members of UE Local 150, the North Carolina Public Service Workers Union, marched with the statewide NC United for Survival and Beyond to demand a “People’s Budget.” The coalition of community, faith, local elected officials and labor organizations held a mock funeral procession and speak-out rally in the state capital highlighting the urgency of passing a budget that addresses the needs of the people.

Workers demanded real raises for state employees, safe staffing in Department of Health and Human Services (DHHS) facilities, $700 million in funding for the UNC System (as part of the Another UNC is Possible campaign), funding for healthcare, housing and public education, and to make corporations pay their fair share of taxes. (Read more about People’s Budget at survivalandbeyond.info/2021-platform.)

Local 150 member Jessica Gazso, a pharmacy technician at Central Regional Hospital and chief steward of the Butner-Area chapter, told the crowd, “currently we are very understaffed and losing lots of experienced staff. Techs and nurses are leaving for better paying jobs.” (Full video of Jessica’s speech can be viewed on the UE150 YouTube channel.)

“The pandemic has led to an increase in mental illness,” said Sekia Royall, president of Local 150 and a DHHS employee who works at O’Berry Center. “We, state DHHS workers, care for some of the most vulnerable people in our society, yet the state budget priorities to do not recognize this. We are chronically underpaid. We were understaffed before the pandemic. Now we are losing even more staff, which makes the safety issues worse. Some units have 50 to 60 percent vacant positions. We deserve safe staffing and a real raise!”

Thanks to the over $5 billion in American Rescue Plan money from the federal government, $6.5 billion in unexpected tax revenue, and several billion dollars in a reserve fund, the state currently has unusually plentiful resources at its disposal. This money could be used to invest in policies that benefit the people. Instead, both House and Senate budgets would leave core services and structures disastrously underfunded while including tax cuts that primarily benefit the wealthy and corporations. Furthermore, the budget fails to expand Medicaid, which would provide healthcare coverage to more working people while being paid for primarily by the federal government. 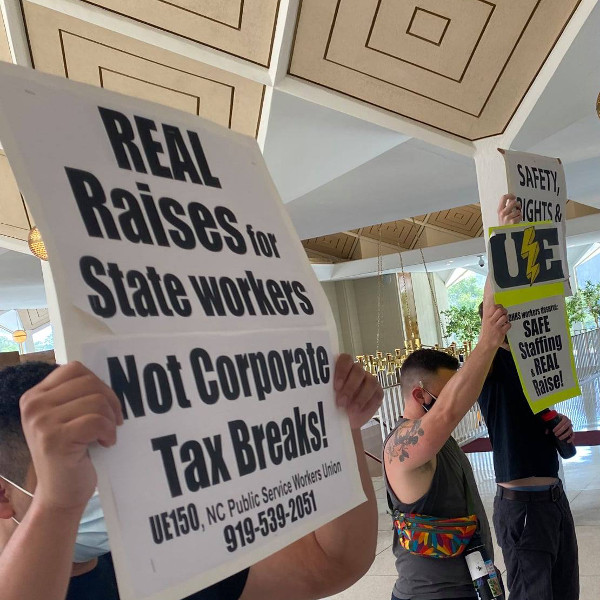 “State workers in mental health facilities are facing a major understaffing crisis,” said Peggy Briggins-Price, Chair of Local 150’s DHHS Council and a developmental tech 2 at Caswell Developmental Center. “We need a state budget that keeps our patients and workers safe. The individuals that we serve deserve the best care possible. But in order to do that they need the best staffing possible. You would want that for your family member. We need raises that respect our years of service. We have worked through the entire pandemic, leaving our families every day we come to work for the state and care for these individuals.”

After talking to aides for Representative Larry Yarborough (Granville County), Local 150 member David Bartholemew reported that the union’s lobbying to have language added to the budget to study the root causes of understaffing in DHHS facilities has been successful, but nothing has yet been confirmed.

UE Eastern Region President George Waksmunski also joined the action.Other union members talked with other wavering Democrats, who had previously voted to uphold the Republican’s budget in the Senate, such as Senator Kirk DeViere (Cumberland County). Some went directly to the House chamber where the full session was actively debating the budget. Workers held signs outside the balcony and chanted for funding for “housing, healthcare, not corporate welfare.” House Speaker Tim Moore had to temporarily stop the session because the chanting was so loud. Workers felt proud that their message was heard loud and clear!

MVAmainUEEast2021-09-20T19:47:40+00:00
Page load link
This website uses Cookies and other third party tracking software. By checking this box, you confirm that you have read and are agreeing to our terms of use regarding the storage of the data submitted through this form. Please visit our Site Usage Agreement for more information. OK
Go to Top