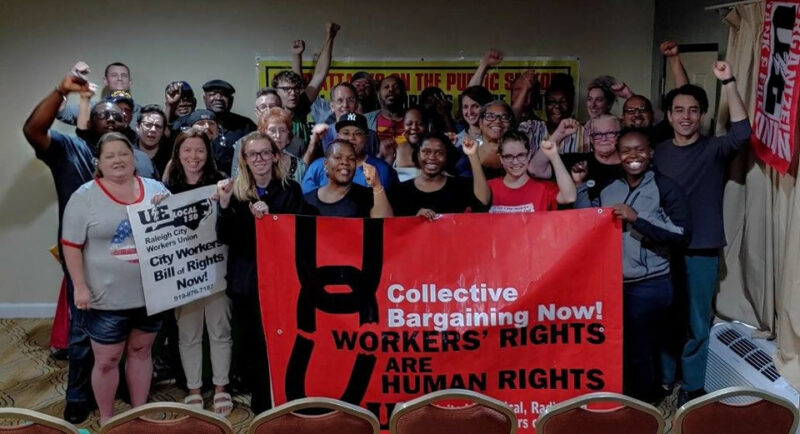 Directly after the organizing blitz, over the weekend of June 15-16, Southern workers from the UE, National Nurses United, International Longshoremen’s Association Local 1422 met for a Workers School and to launch a Southern Workers Medicare for All campaign.

In the lead up to the 2020 elections, the Southern Workers Assembly is encouraging all workers organizations to raise up the demand for affordable healthcare, specifically for the passage of the bills in US Congress for expanded and improved Medicare for All (HR1384/S1129).  Many of presidential candidates are split, or have different plans for fixing the broken US healthcare system. By having a clearly defined, unifying demand, we can advance our struggles during this electoral period, regardless of who wins. The SWA believes that by building a workers-led, Southern movement for Medicare for All it can help to draw non-union workers into our movement, and build union-workplace organization across the South.

A major part of this campaign is doing workplace-based education of workers, including doing outreach to non-union workplaces with informational leaflets about the campaign, given that most all workers still primarily receive health insurance through their employer.  Improved Medicare for All would reduce the reliance of workers on their employers, by providing every access to quality healthcare whether you are employed or not employed. It would also take bargaining for health care off the table, which most unions spend lots of time and clout bargaining over. Instead, this energy could be spent on bargaining members better wage increases, paid time off, safety protocols and other much needed improvements.

As part of this campaign, the SWA hopes to organize city-wide committees, lead by workplace organizations to do broader workplace and community outreach, eventually hosting public Town Hall meetings with the plan to pass resolutions in city and county councils across the South. Already at least three cities including St. Petersburg, FL, Durham, NC and Carrboro, NC, have already passed such resolutions.

According to the NNU draft resolution:

WHEREAS, the United States spends nearly twice as much per capita on health
care as all other comparable countries and yet ranks only 35th in the world by
global health standards, including on such critical barometers as average life
expectancy, infant mortality, maternal mortality, and death from preventable
diseases; and

WHEREAS, the Affordable Care Act (ACA) enacted important improvements,
primarily through the expansion of Medicaid in states that have agreed to
do so, and limits on some insurance industry abuses, that reform left tens
of millions with a continuing crisis in access, cost, and quality of care; and

WHEREAS, the uninsured rate for U.S. adults has risen for four straight years
up to nearly 30 million, even after implementation of the ACA, with the greatest
increase among women, young adults, and lower-income people; and

WHEREAS, tens of millions more who pay for insurance remain underinsured
due to the still largely unregulated high cost of medical care that has led to
one-third of all GoFundMe accounts being established to pay for exorbitant
medical bills; and

WHEREAS, more than 40 percent of all U.S. adults under the age of 65 forego
needed medical care, 30 percent fail to fill a prescription or take less than
the recommended dose, and a third said they had to choose in the past year
between paying for food, heating, housing, or health care, and

WHEREAS, the inability to pay medical bills continues to be a leading cause
of personal bankruptcy, and people who need medical care should never face
bankruptcy as a result of needing care;

To be part of this campaign, email the Southern Workers Assembly at [email protected] 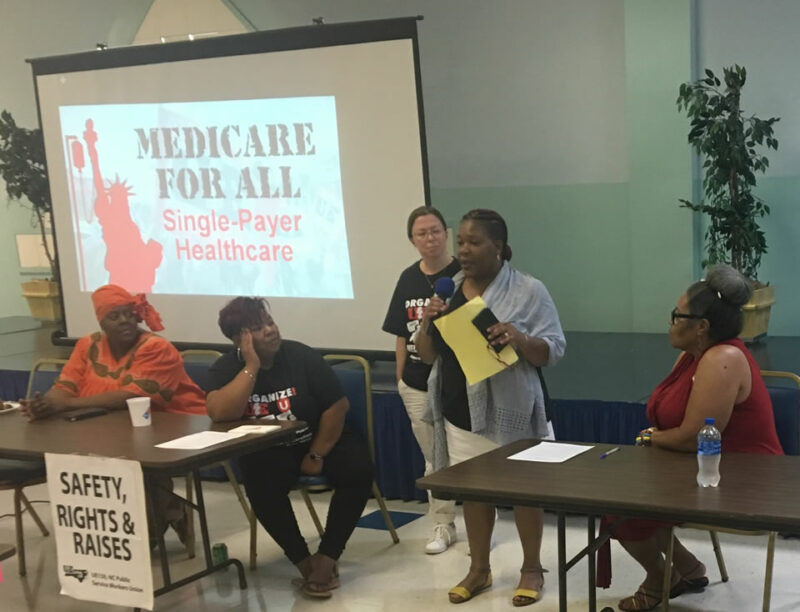 MVAmainUEEast2020-09-03T01:26:24+00:00
Page load link
This website uses Cookies and other third party tracking software. By checking this box, you confirm that you have read and are agreeing to our terms of use regarding the storage of the data submitted through this form. Please visit our Site Usage Agreement for more information. OK
Go to Top