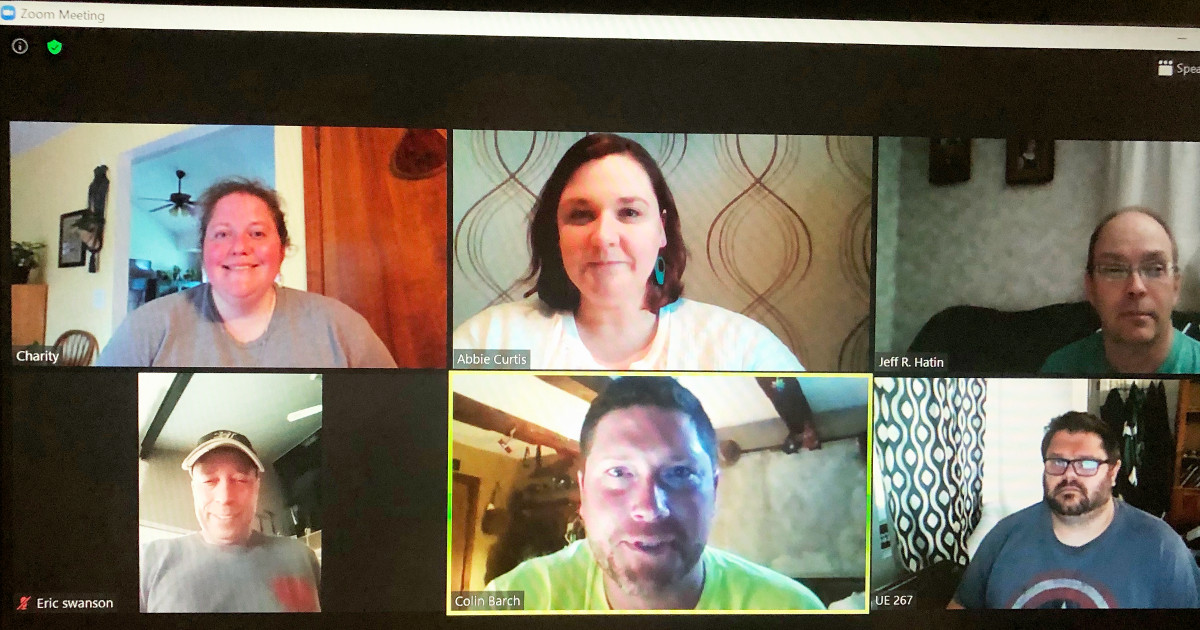 The leadership of UE Local 267, which represents service and maintenance workers at the University of Vermont, had spent months preparing for their next round of negotiations — and then the COVID-19 pandemic hit, leading to what Local 267 Vice President Charity Dugener called an “unprecedented bargaining experience.”

With the employer taking advantage of the uncertainty caused by the pandemic to demand concessions, the local pivoted to protecting, preserving and maintaining their contract.

“UVM sought cuts and concessions like we had never seen before,” said Dugener, “all while our membership kept UVM safe and operational during this once-in-a-lifetime pandemic.”

The university administration imposed pay cuts on non-union staff (later rescinded, after those workers began organizing with another union), and demanded the same of Local 267, along with a “mountain” of other concessions.

Most shockingly, the administration proposed reducing employer contributions to the retirement plan to zero for the life of the contract. They also sought limits on the ability of workers and their families to receive free tuition at the university — one of the primary reasons why many Local 267 members choose to work there in the first place.

To add insult to injury, the administration alleged that UE members look “unprofessional,” and demanded they not only wear uniforms at work, but take on the labor and expense of laundering their own uniforms. Local 267 members come from all over the world (Burlington is home to a federal refugee resettlement program), and many wear traditional clothing with cultural or religious significance. The UE local forcefully rejected any suggestion that such clothing was in any way “unprofessional.”

In one area, the administration did propose improvements — but only for some. Clearly feeling pressure from the popular movement for a $15 minimum wage, they proposed to raise the wages of the lowest-paid workers in the bargaining unit, but to pay for it by cutting wages for workers in higher pay grades.

The members of Local 267 rejected this divide-and-conquer tactic. At membership meetings held during bargaining, they voted to pursue wage increases as across-the-board dollar amounts, which would especially benefit lower-wage workers but without cutting the pay of higher-earning workers. “During our final push for our contract the membership came together in one voice and said they supported a flat across the board raise because we were all in this together,” said Local 267 President Mike Wells. “For that I am eternally grateful.”

Maintaining unity in this way paid off. The final agreement, reached in April, will bring all workers up to the $15 minimum without any cuts to pay or benefits.

Employer contributions to the retirement plan will remain the same, and tuition reimbursement, rather than being limited, will be expanded to cover certain job-related classes or professional certification programs. Workers will not be required to wear uniforms.

The new contract adds a second cultural holiday, a particularly important win for a diverse workforce whose members come from a wide variety of cultural and religious backgrounds. Workers with 15 or more years of service will also receive a third personal day.

“Our membership is the backbone of this university community and our collective efforts within this community kept it open and contributed to the successful completion of the academic year,” said Dugener. “We were happy to be able to bring them a well-defended contract, wherein the lowest-earning among us will be brought to $15 per hour while still making fair gains for all.”

“I am immensely proud of the work our bargaining team did,” added Wells. “When faced with massive concessions, we not only fought them off, we made financial and quality-of-life gains. This would have not been possible without the support from our rank-and-file brothers and sisters.”

MVAmainUEEast2021-06-24T15:05:42+00:00
Page load link
This website uses Cookies and other third party tracking software. By checking this box, you confirm that you have read and are agreeing to our terms of use regarding the storage of the data submitted through this form. Please visit our Site Usage Agreement for more information. OK
Go to Top