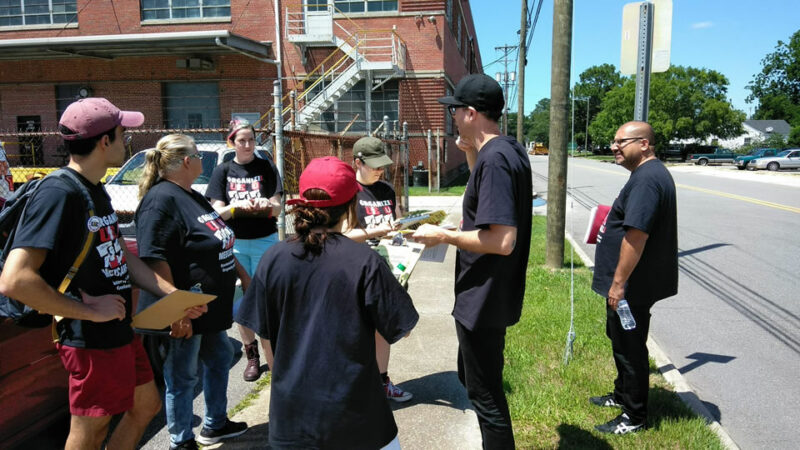 From June 9 – 14, 2019, over 40 UE and Unifor activists gathered in rural eastern North Carolina for an organizing blitz. The workers targeted 10 workplaces to reach out to non-union workers about joining the union. This was part of the North Carolina Public Service Workers Union, UE local 150 campaign to build a statewide movement of municipal workers to fight for a Municipal Workers Bill of Rights. The blitz was centered in Wilson, NC, but targeted city workers in Wilson, Goldsboro and Rocky Mount, as well as reaching out deeper to workers in others areas where the union already has chapters, such as city workers in Raleigh, four state-operated Department of Health and Human Services mental health facilities, and two auto parts plants.

This was part of the North American Solidarity Project between UE and our close labor ally in Canada, Unifor.  Three members from Unifor came down to participate in the blitz and learn about the struggles of Southern workers, and the social-movement union approach of Local 150.

Throughout the week, the participants circulated over 1,800 fliers to non-union workers and collected more than 300 names of interested workers to join the union, and 134 workers attended union interest meetings.

“This blitz was really excellent at bringing more attention to eastern NC for our Municipal Workers Bill of Rights campaign,” stated Bryce Carter, President, UE150, street maintenance worker in the City of Greensboro. “By bringing our union message to these three new cities, we can now really say that we have a statewide movement! This is a big advance in building workers’ power.”

In surveying the workers, it was discovered that without a union, many of the municipal workers suffered from dangerous working conditions, including no required breaks to protect themselves from excessive summer heat. After the tragic death of a solid waste laborer in the City of Charlotte, Anthony Milledge, in the summer of 2017 from heat-related illness, Local 150 fought for and won excessive heat policies requiring hourly breaks when the heat index is over 90 degrees in the cities of Greensboro, Durham and Raleigh. This is all part of the statewide Municipal Workers Bill of Rights campaign to set basic standards that all city workers in the state and southern region should expect.

Workers also reported low wages, unaffordable health insurance, workplace racism and unfair management as some of the top issues to organize around. 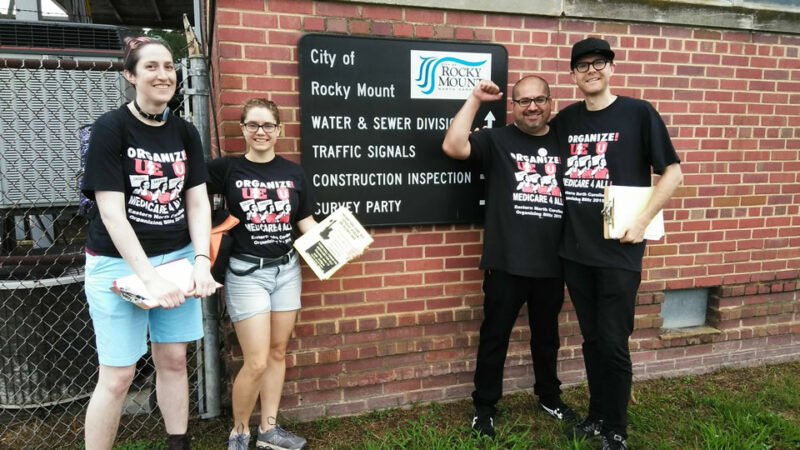 City workers in Rocky Mount reported having to pay $200 every two weeks in health insurance premiums. Additionally, many pay utility bills around $400 every month.  This is impossible to sustain on the wages of around $11-12 per hour that they often earn.  Many of the eastern NC cities, such as Wilson and Rocky Mount, have set up their own publicly owned municipal power systems, generating power locally for their residents. Nineteen of these cities have formed an alliance to share power among themselves, and all contributed to building five power plants at a cost of $3.5 billion. However, in 2015, these cities sold these power plants to privately owned corporation, Duke Energy, for only $1.5 billion, leaving the difference of the bill to fall on local residents, who now collectively pay more than $10 million a year in interest!

“It was powerful to see the strength in numbers,” stated Jess Sims, blitz participant and Young Activist from UE local 123 from Staunton, Virginia. “If you stand alone you will fail. But everyone coming together for a common cause can make real changes.”

Public workers in North Carolina are banned from collectively bargaining a union contract. So Local 150 is a direct join, direct action union where workers can sign up to become members and not have to wait for an onerous labor board election. This new style of unionism is picking up across the South and even the country.

As part of the outreach, the participants talked to workers about their healthcare costs and invited workers to attend a Town Hall forum in Wilson, NC in support of Medicare for All.  The event was hosted on June 13 at the Darden Alumni Center and attended by many workers and community supporters, including state Representatives Jean Farmer-Butterfield and Raymond Smith. Workers spoke out about their struggles with health care costs. Members of Unifor spoke out about the single-payer system of healthcare in Canada, to give workers a vision about what we are fighting for.

MVAmainUEEast2020-09-03T01:20:51+00:00
Page load link
This website uses Cookies and other third party tracking software. By checking this box, you confirm that you have read and are agreeing to our terms of use regarding the storage of the data submitted through this form. Please visit our Site Usage Agreement for more information. OK
Go to Top